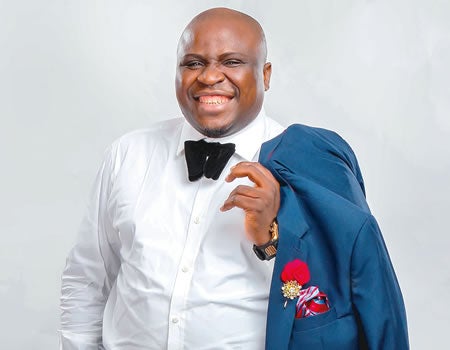 I started a show called ‘Laugh Matters’ as a springboard for the young ones –Comedian/Compere Extraordinaire, Gbenga Adeyinka

Nigerian elite comedian and compere, Gbenga Adeyinka has been busy mentoring youths through a platform carved for that initiative called 'laugh matte

Nigerian elite comedian and compere, Gbenga Adeyinka has been busy mentoring youths through a platform carved for that initiative called ‘laugh matters’.

Speaking to Africhroyale at the end of year forum of the Association of Professional Party Organisers and Event Managers of Nigeria (APOEMN), held at The Coliseum, in Lekki, Lagos last month, Mr. Adeyinka who has been in the entertainment industry for decades said he had to begin the initiative because he saw that he needed to build a comedy sector in the South-West of the country.

According to him, “Since the first day I started comedy, I had something called ‘Generation Next’ in my magazine, on my TV program. Ten years ago I decided to stop doing comedy shows in Lagos because, I’m not being a tribalist, but I saw that I needed to build a comedy sector in the South-West, because it got to a point where everybody was saying “Warri Warri; in Warri where we’re from,” and so on. So I felt it would be a great disservice if I didn’t do something to grow the industry so I started a show called ‘Laugh Matters’. We’ve done Asaba, Oshogbo, Ilorin, Abeokuta, Ibadan, etc. We do it every year and we’ve done it for the past nine years and this is the tenth year.What I’ve done in ten years is to grow giants. It’s not by my power but by the grace of God. I use ‘Laugh Matters’ as a springboard for the young ones.”

On his impression about APPOEMN, the celebrated compere averred thus, “

“My impression is, If you’re embarking on a journey, you go faster if you go in a bunch, and that is what I think APPOEMN has come to do. The event industry in Nigeria is the biggest in Africa; I say that with no fear of contradiction, and the only way to make it grow in quantum is for all the stakeholders to come together and work together to make it grow and that’s what they are doing”.

“What has impressed me is that they’ve been together for so long doing things together; even though they are competitors, they don’t see themselves as competition, You know, competitors not in competition and for me, I say kudos to them, I say the sky’s the stepping stone and that whatever they’ve done in the past to keep themselves together, they should keep doing it because this is what Nigeria needs. We need to organise ourselves. Overseas they have an organised body for events and with it you can bargain, get things done for the industry, move forward in leaps and bounds’.

Some of the top executives of the organisation who spoke with Africhroyale at the event were:

What are some of the things APPOEMN achieved in the outgoing year and some set to achieve this year?

The first thing we achieved was being able to bring in international speakers. We’d never been able to do that over the years but last year we brought in three international speakers to come in to train us., We increased our membership from a hundred and twenty to two hundred and ten. We were able to do free training as well as ones we paid for. One of the things we plan to do is to continue to educate ourselves, continue to push for the government to support us so that we can have a standardised and uniform association around Nigeria, such that if you’re hiring a photographer in Port Harcourt, it would be the same thing as hiring one in Lagos, in terms of standard and quality.

What are some of the controls you have in APPOEMN?

Right now we can only control those who are members of APPOEMN. We’ve set standards in the Association. We have consequences as well as suspensions, fines etc and sometimes it’s just bringing someone back to educate them.

Are there other things intended to achieve by this end-of-year party other than coming together to eat and drink?

Yes. One of them was inviting our industry colleagues that are non-APPOEMN members to join us and celebrate with us; and also to show them what we do in APPOEMN so that they can come on board.

APPOEMN gets bigger every year. What plans are there in place to sustain integrity and positively assert yourself better?

We will continue to set standards as I said earlier, and definitely  getting government involvement, because the bigger and stronger we get, the very pertinent that would be.

Has any effort been made in getting the government involved?

Yes. Luckily we’re having a meeting with the Minister of Tourism and we’re hoping  after that, it would foster the moves for further growth.

Why is your end-of-year party at the beginning of another year?

As you know event planners and event practitioners are always working, planning parties for other people. This is our opportunity to have one for ourselves. It is a rare case to have party planners sit down and relax as you see them now. So once a year we have  a party and this is the only time in January that we can have it because December is a very busy period for planners.

What plans are in place to make APPOEMN better this year?

We have members all over the country but we don’t have chapters, so one of the things we want to do is to have chapters to move the association forward. We have members who have all been learning about our standards as an industry, so its left for them to go out and inculcate these standards in their teams. With the chapters set up and running, we hope to have more things better streamlined for more growth and success.

Does every event planner have to be a member of APPOEMN, if not what are the disadvantages?

At some point in the future, yes. I don’t know what the disadvantages are but I can tell you the advantage of belonging to APPOEMN. We help each other. No man is an island. People come across challenges when they are running an event. All they have to do is come to the forum and state their challenges. We help our colleagues all over the industry. We have a decorator who is a member who did a decoration somewhere in ogun State and as soon as she finished, the rains started and everything came down. Members rose up to her aid and by morning a whole new one had been set, and before the commencement of the event, the place was all sorted out. How about that? What more can you want when you have people that support you and rise up to you on whatever occasion you have?

Is APPOEMN limited to parties and events in Nigeria or you also cross the borders?

O yes we do cross the borders. We have destination planners within us. We have people in Canada and other places who are members of APPOEMN, and you know are still growing.

As the spokesperson of APPOEMN, how do you think the public sees APPOEMN?

A lot of people know us for what we do, for  our standards and for what we represent, which is the event industry and for anyone that knows APPOEMN, they know that the organisation has the best. Yes there may be a few unpleasant stories of encounters with some people. For the fact that we’re humans there will be some downsides amidst the highsides, but that’s it. What we work on most of the time is how to get a relationship with everybody in the industry. And that is why we’re also having an end of year party where all our friends, not just our members are invited  to join us. That’s telling you what we represent; we represent a voice in the industry where we want people to major on their professionalism and integrity of the trade to make it an enviable one, because we employ a large number of people in our country, contributing positively to the economy. We encourage our members to play objectively and be purposeful.

With the emergence of APPOEMN as the umbrella body for party practitioners, what things have really changed in party circles?

Because the event industry is a trendy business there are some things that used to be in vogue that are no longer obtainable and there are some things in time past that are now coming back. We could look at it in terms of operations or in terms of trend. Whether it is in terms of operations, which is how people run their businesses or trends which is what and what is being used for parties, I can tell you we are on top of our game, in delivery and telling event stories in ways that are appealing to every audience that any brand is trying to market. We use our creativity, skill, and capacity in the industry. In terms of moral standards, people are beginning to admit to us being the best. Yes, there may be a few trying to cut corners but because there’s now a voice to address these, the ugly trend has been abated. As long as we know about it, we talk about it. So with that people know there are people on the lookout for any bad behaviour that we’d look at without prejudice or bias. You don’t have to be a member of APPOEMN for us to deliberate on your case. We’d do so as long as you bring it to our table.

Keep speaking the truth to power. Everybody who comes on board under the umbrella of APPOEMN is a brand of their own; a CEO or owner of an establishment. And so they are the ones that make the decisions; but we tell them, to bring our values into their brands, as entrepreneurs or international brands etc, such that , it will be what is obtainable because it is what they bring on board as values that their team members will also do.

That’s why  we know we’d keep getting better and by getting our members to emulate and infuse in their values these integrity based solutions, provisions for the event industry and for everyone who uses our services. That is what we are saying in different ways, and when I say different ways I mean for instance by bringing you guys the media and our other partners to voice what we are saying so that many can hear what we are saying and begin to introduce these values into their brands.