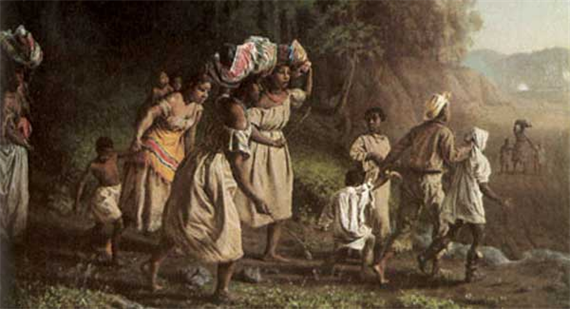 Ways African Women Escaped Capture and Enslavement in the 1800s

At the turn off the 18th century, slavery had become a vibrant business for many European merchants in Africa. Strong Men and women were captured agai

At the turn off the 18th century, slavery had become a vibrant business for many European merchants in Africa. Strong Men and women were captured against their will and forced to sail on ships never to return. In the western lands, they were treated as property and made to work under harsh conditions with little or no food to eat or water to drink and take their bath.
At the start of the slave trade, it preferable to take male slaves, including young boys who presented a longer lifespan. After a while, however, female slaves began to be taken and made to work on plantations and in the house. They also became wet nurses and nannies to their owners’ children. African women also worked harder and longer than men because they were used to more activities in their homes in Africa. Many slave masters also preferred women for sexual exploitation.
After a while, the demand for slave women shot up magnificently and African women came up with ways to escape getting torn from their families and taken in as slaves.
Here are a few ways African women escaped being captured into slavery.
This was one of the easiest and safest ways of escaping slavery. At the time when African women were in high demand by slave merchants, they got pregnant to avoid being captured. The slave market did not like to have pregnant women because they were very expensive as they were sold for the price of two.
Secondly, ship masters could not take pregnant women on their ships due to the long sea trip and poor living conditions. Slaves were literally packed and locked up in dark dungeons only being allowed to exercise or entertain sailors every now and then. They were also given sea water and little food to sustain them. These conditions were not favourable to pregnant women. Women, therefore, got pregnant or faked a pregnancy to escape being caught.
In parts of modern day Chad and Mali and other north African countries, many women were captured mainly because of their beauty. These women attracted the slave masters, merchants and sailors and they were very expensive and in high demand. Unfortunately, many were impregnated and killed on the ships by the time they got to their supposed destinations.
In order to avoid being captured women in Chad started to wear rings on their lips to expand it, leaving it flappy and very unattractive. The technique prevented many of them being sold into slavery and soon became part of tradition.

In many African kingdoms, the royal household, court and soldiers were very much respected. During the slave trade, many such traders stayed away from the family of soldiers and the king for fear of being killed or imprisoned.
With the increasing demand for female slaves, many women, especially young girls offered themselves as gifts to soldiers and kings. Accepted, the women were protected from being captured. After a while soldiers and kings camped women in secret camps during slave raids.
For fear of being captured into slavery many African women unwillingly had affairs with the white merchants and sailors.

By having such affairs, they were free from being captured as slaves because they entertained the westerners on visits or transits providing shelter, sex and food to eat.
Despite being shunned and even disowned by their families, many young women chose this option than to be taken into slavery after hearing the ordeals that captives faced on the ships and plantations. If an African woman got pregnant for a westerner, it ensured her more security and protection.
Many African women chose the option of escaping slavery by abandoning their homes and finding refuge in other kingdoms until the next slave raid happened. By the 18th century, slave raids had become very common and spies gave tip-offs to communities a few hours before they occurred. With women being the target, they would pack a few belongings and even sometimes left their families behind, running as far as they could. They settled in places that had not yet been raided and if they were lucky were never caught.