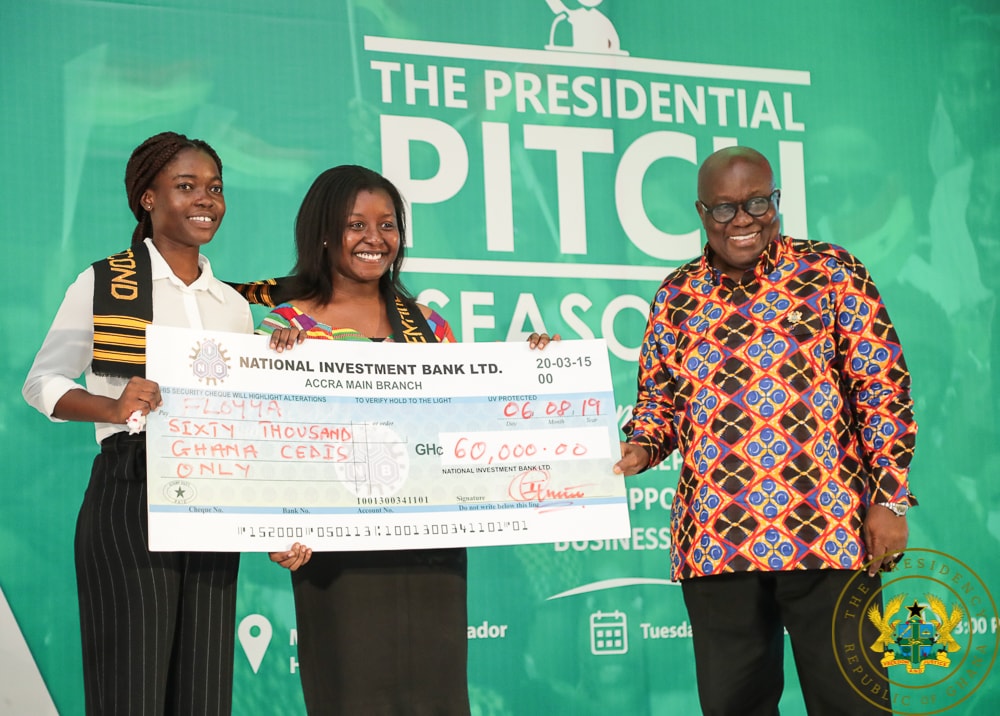 Two students of the Kwame Nkrumah University of Science and Technology (KNUST), Matilda Asantewaa Sampong and Emilee Otoo Quayson on Tuesday (August 6, 2019) emerged winner of season II of the Presidential Pitch.
The duo are two university students who process sanitary pads using banana and plantain fibre.
Apart from the prize money and investment package of GHC60,000 received from President Akufo-Addo, Matilda Asantewaa Sampong and Emilee Otoo Quayson also received a personal donation of GHC40,000 cheque from President Akufo-Addo.
At the ceremony where the winners were announced, President Akufo-Addo also gave a personal donation of GHC40,000 to the winners.
The two girls contested with nine other teams and questions before a panel of judges, in the presence of the President, ministers of state and members of the diplomatic corps, at the Presidential Pitch event in Accra.
Their business which is called Floyabana Pads is mainly targeted at rural women who cannot afford the mostly imported sanitary pads on the Ghanaian market.
The Presidential Pitch is a project designed and organised by the Ministry of Business Development to support young Ghanaian entrepreneurs between the ages of 18 and 35 financially and technically to implement their ideas.
The ideas presented must exhibit four characteristics: feasibility, innovativeness, scalability and be impactful.
The programme started with about 200 competitors who were scaled down to 10 finalists.
The fourth to tenth competitors received GH25,000 worth of grant each while the second and the third received GHC40,000 and GHC35,000, respectively. The first received GHC60,000.
In his keynote speech at the Pitch, President Nana Akufo-Addo applauded the finalists for their determination and creativity. He entreated them to continue to develop their talents and skills.
He was optimistic that the contributions of the 10 would cause more young people to develop problem-solving ideas that would create jobs for others.
He challenged them to develop and enhance their entrepreneur skills in order to compete favourably with global businesses, saying that was the surest way that Ghana’s manifest destiny and the capacity of the Ghanaian to construct a new, prosperous Ghanaian civilisation that reflected the values and culture, which had defined the Ghanaian people through the ages, could be realised.

The President further urged young entrepreneurs in the country to seize the opportunity offered by Africa’s Continental Free Trade Area (AfCFTA) to grow and expand their business to meet global standards.