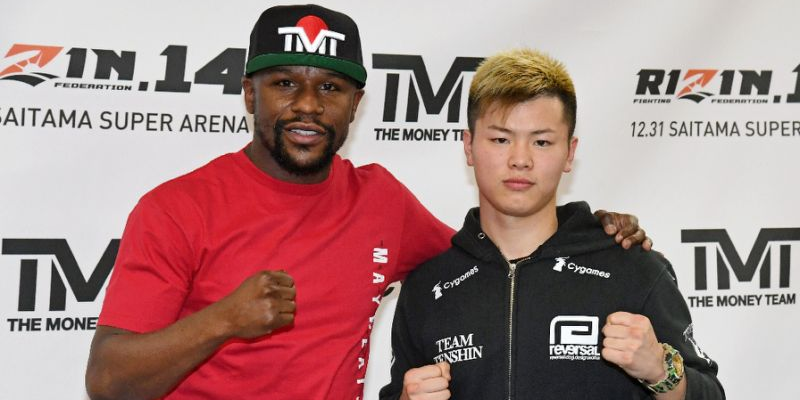 All is set for the new year’s eve fight between Japanese kickboxing prodigy Tenshin Nasukawa and Boxing star Floyd “Money” Mayweather near Tokyo.

According to Mayweather,his focus was on entertaining the fans during the fight,saying it qas all about entertainment.
The 41-year-old unbeaten champion has been tempted out of retirement — again — for a one-off “exhibition” in Saitama, north of Tokyo, against “Ninja Boy” Nasukawa, a fighter more than half his age at 20.
“It is all about entertainment. I don’t worry about anything,” Mayweather told reporters in a news conference devoid of the hyped-up rhetoric that usually accompanies pre-fight events.
Monday’s bout will be held under boxing rules over three three-minute rounds, which the veteran Mayweather said he could complete “in his sleep.”
The exhibition will not have an official winner or loser if it goes the distance, meaning both men can keep their treasured unbeaten records in the absence of a knock-out.
Mayweather has also said there will be no official judges and the bout will not count on the official record of either athlete.
However, the relaxed American said he would not even be concerned if he were to be floored by his Japanese opponent.
“Me getting knocked out or me getting knocked down … I don’t worry about it at all. If that does happen, I mean that’s entertainment. That’s all we need to see,” said Mayweather.
For his part, Nasukawa said he did not feel the rules of the bout were “unfair,” even though he will be deprived of his kicking skills.
“All I have to do is to give 100 per cent. Since Mayweather is expected to dodge my offence, I really want to hit him,” said the 20-year-old.
The fight was first announced in early November but Mayweather then abruptly called it off following what was later described as a “misunderstanding” over the rules of the fight, according to mixed martial arts promoter RIZIN.
RIZIN boss Nobuyuki Sakakibara flew to Los Angeles for talks with the American boxer and won him round, finally agreeing the terms for the three-round contest.
Sakakibara has stressed that Monday’s bout will be far from a sparring match, adding: “They will fight aiming to knock out.”
“Money” Mayweather came out of a two-year retirement in 2017 and knocked out mixed martial arts fighter Conor McGregor in the 10th round of a super-hyped boxing match.
There are also rumours Mayweather could take on reigning UFC lightweight champion Khabib Nurmagomedov, who said last month any match-up would be “twice as interesting” as the McGregor fight.

Loading...
Newer Post
Brits Prefer Prince William Gets the Crown Instead of Charles When the Queen Dies
Older Post
Miss World Kenya 2013 to be Killed By Hanging Today