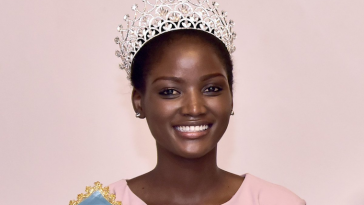 She came back from the Miss World Pageant in long attachments which drew flaks from the country’s president . However,Uganda outspoken president Yowe

She came back from the Miss World Pageant in long attachments which drew flaks from the country’s president . However,Uganda outspoken president Yoweri Museveni has showered praises on Miss Uganda Quiin Abenakyo who was recently crowned Miss Africa for heeding to his advice of having natural hair.

Recall the president hosted Abenakyo and her family for a dinner at his country home in Rwakitura on Saturday. Museveni earlier this month criticised Abenakyo for wearing ‘fake’ Indian hair.

“Abenakyo is indeed a tall, beautiful Musoga girl. My only concern is that she was wearing Indian hair. I have encouraged her to keep her natural, African hair. We must show African beauty in its natural form,” he said on December 19th after meeting her at State House, Entebbe.

However, on Saturday, Abenakyo turned up for the dinner with natural hair.

“Like I indicated earlier, the government will support the Miss Uganda Foundation and also support Abenakyo in her activities. I wish her success in her reign as Miss Uganda and Miss World Africa,” he said.

The dinner was attended by First Lady, Janet Museveni and state minister for Tourism, Godfrey Kiwanda