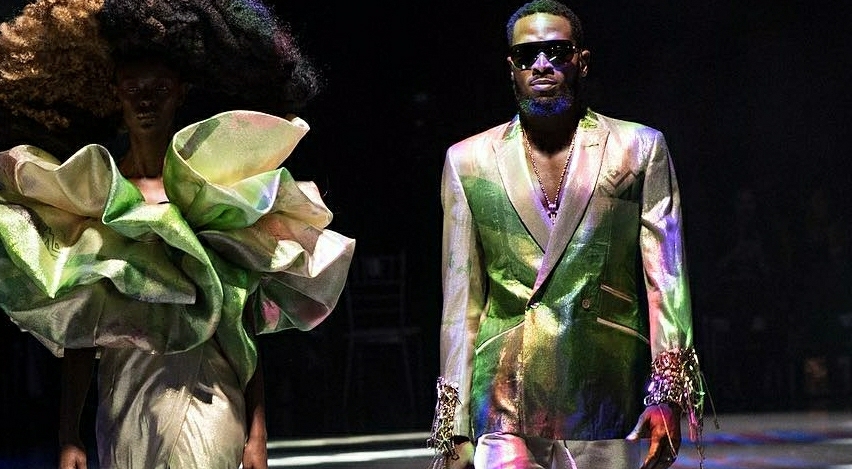 Nigerian superstar, D’banj now has added another ace up his sleeves as a model, debuting the runway at the African Fashion International Johannesburg

The Runway 2018 at #NYFW, a Celebration of Black Hair
Han Hyun-min: South Korea’s First Major Black Fashion Model
In Memory of a Fashion Icon Who would have marked another Milestone at 57

Nigerian superstar, D’banj now has added another ace up his sleeves as a model, debuting the runway at the African Fashion International Johannesburg Fashion Week in South Africa.

The Issa Banga crooner walked the runway wearing a suit made by David Tlale. Here are photos of the singer at the African Fashion International Johannesburg Fashion Week;
The African Fashion International’s (AFI) Fashion Weeks have always been known for their world-class fashion events, showcasing designers from all over the continent in Joburg and in Cape Town. Last year it marked the conclusion of a 6-year partnership with title sponsor Mercedes-Benz South Africa.
While AFI celebrated its 10-year anniversary, the announcement that CEO and Founder of AFI, Dr Moloi-Motsepe, had been nominated for the Fashion 4 Development Franca Sozzani Award was an affirmation that African Fashion is moving in the right direction.
AFI has, over the years, built a strong and diverse ecosystem of fashion lovers, writers, creators, curators and innovators across South Africa and the continent at large. The strong pan-African lineup, a result of very careful curation of the best fashion artists and entrepreneurs on the continent, is what keeps the crowds coming back to see the latest works of these talented designers, season after season.
On the other hand, D’banj now joins the likes of Wizkid who had also walked the fashion runway. Wizkid became the first African artiste to walk down the runway at the Dolce and Gabbana fashion show in Milan.
After arriving Milan with British super model and actress, Naomi Campbell, Wizkid took the runway by storm; wearing a very stylish black and gold outfit, complete with studded mask and luxury jewelleries. Wizkid and Naomi appeared to be new best friends after she attended his sold out AfroRepublik festival in London and their relationship seems to be bringing in the bucks for the singer.