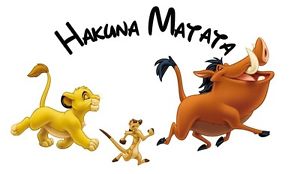 The registration of Hakuna Matata,the Swahili phrase meaning ‘no problem’ as a trademark by Disney entertainment company has drawn the ire of many Afr

The company recently announced a live-action remake of The Lion King, billed for release in July this year: a move which spurred the signing of a petition by 37 people so far, to get Walt Disney to reverse the trademark of the Swahili phrase “Hakuna Matata”.
Hakuna Matata was registered since 2003 in the United States after the release of the 1994 film, The Lion King, which made the phrase popular.
Among protesters who launched the on-line petition on change.org to reverse Disney’s action include Zimbabwean-Canadian activist, Shelton Mpala.
According to Mpala, “I liken this to colonialism and robbery, the appropriation of something you have no right over. Imagine, if we were to go that route, then we owe the British royalties for everyone who speaks English, or France for when we speak French,” he wrote on the petition.
Even in the 1980s, way before the release of The Lion King in 1994, Hakuna Matata was the title of the classic song recorded by Kenyan band Them Mushrooms.
Mpala wants to stop Disney, any corporation and individuals who want to trademark languages, terms or phrases they didn’t invent.
“For hundreds of years, Africa has been exploited in some shape, fashion or form whether its been our arts where we have billions of dollars of African artefacts in museums all over the world, through our natural resources. And this to me looks like one of those things that I will have to fight,” he told the BBC.
For Ngũgĩ wa Thiong’o, Kenyan writer and professor of comparative literature at the School of Humanities at the University of petition on change.org to reverse Disney’s action.
These Africans believe Disney cannot own a phrase that is used commonly used every day.
“It would be like trademarking ‘good morning’ or ‘it is raining cats and dogs’ in the case of English … It’s a common phrase we use every other day. No company can own it,” he told NPR in a recent interview saying he was “horrified” by Disney’s claim.
Until Disney decides to cancel the trademark, anyone in the United States – including Africans – would have to pay royalties to print the phrase Hakuna Matata on a T-shirt