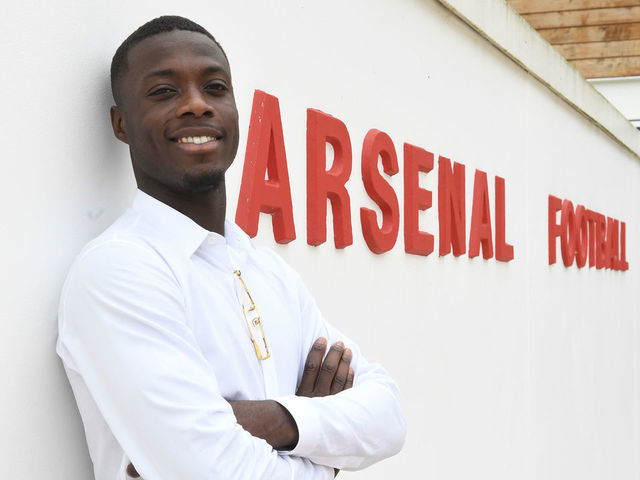 Nicolas Pepe is a French-born Ivorian who has risen from the squalor of poor family background to become a record-signing player in one of the elite clubs in Europe. His is another inspiring story sure to motivate so many out there struggling to rise from inherent challenges to achieve their dreams.
24-year-old Pepe started his footballing career as a goalkeeper at local side Solitaire Paris Est, before going on to become an outfield player. In the pursuit of his dream, Pepe says he had the full support of his parents who rather sacrificed a lot for him to become fulfilled.
Pepe was last week announced as an Arsenal player for a reported club-record fee of £72 million.
“My family emigrated from Ivory Coast to France in 1995 and used to tell me about how difficult that was, especially when we were at school. They used to tell me that we had everything and they used to have nothing,” Pepe told Arsenal’s official website.
“They would tell us stories of how they’d walk 10 kilometres barefoot and we were lucky to be able to go to school by bus. When we grew up, my mother and father stopped working and came to live me just because of football, and just to make sure my dreams came true.
“They were there during the toughest times and the best times and they are still here right now. That is what they have done to this day. They helped me make this dream come true and they will continue to be by my side to support me.”
Pepe, who can play as an inverted-winger or as an outright winger and also as a forward, stated how he got bored as a goalkeeper.
“Let’s go right back to the start when I used to play in goal. When I was a goalkeeper, I think we used to win six or 7-0 and I asked if we could change it so I could play on the pitch because I was bored in the goal. So then I swapped and moved on the pitch and I would even score,” the 24-year-old revealed.
“Playing in goal back then helps me a lot now. I know how a goalkeeper moves concerning the position of the ball. That means I have a different way of analysing the position of the goalkeeper perhaps in comparison to others who might not understand how a goalkeeper moves. I know very well how they think and move concerning the position of the ball.
“I loved playing in goal when I was really young but when I was 13 years old, I moved outfield. That’s when I started to imitate Drogba and his celebrations. He began by playing for Marseille and we would watch him there. That or when he played for the Ivory Coast squad where he did the coupé-décalé, a type of dance. That is something we would often do with my friends. It is something I will never forget.”
The forward, who represented Ivory Coast at the 2019 Africa Cup of Nations, sat out Arsenal’s 2-1 defeat to Barcelona last Sunday. He is expected to be in action when the Gunners travel to Tyneside to take on Newcastle in the Premier League this weekend.

The Ivorian moved to the Emirates Stadium from French side Lille – where he honed his skills as a forward – scoring 35 times from 74 appearances.