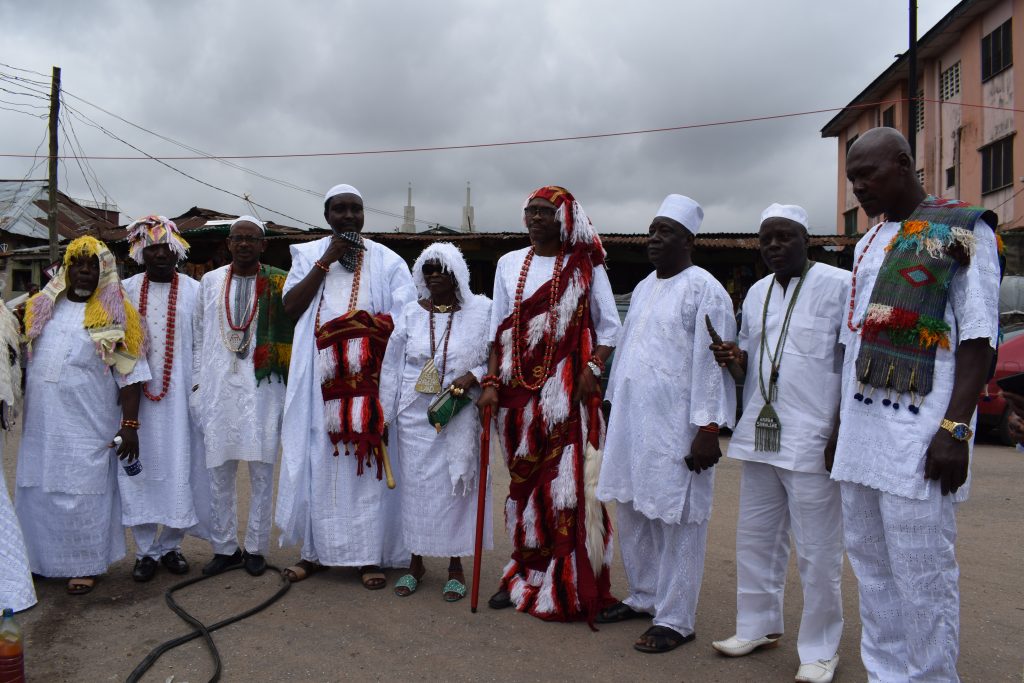 Many state governments in the western part of Nigeria declared Tuesday, August 20 a public holiday to mark Isese Day, which is the zenith of all trad

Many state governments in the western part of Nigeria declared Tuesday, August 20 a public holiday to mark Isese Day, which is the zenith of all traditional religious activities annually observed by traditional worshippers, who celebrate their deities with festivities.
In Lagos, the day was marked with a plethora of traditional displays, prayers and goodwill to friends, the nation and Nigerians generally as every nook and cranny was filled with festivity.
Speaking about the import of the day, Kabiyesi Tajudeeen Bakare, resplendent in his kingly traditional attire disclosed that;
“The significance of Isese can be found in our origin or heritage. It refers to our foreparents and their way of living. It is what was on before any other religion came into being. Before the advent of foreign religion, our fore-parents had Isese.”
Elucidating further, Kabiyesi Bakare said the day was in celebration of deities who have had a profound impact on human life.
“Deities were human beings who continue living because of the great works they have done, for example, Osun which is a deity doesn’t die. Our fore-parents believed if you needed children, you would have to contact Osun to get your wish or desire. So the main work of Osun was to bust barrenness. Osun is no more but what she converted herself to, being water still exist. That is Isese. We have the belief that if you are barren and drink the water you will have children. Likewise, Sango was a being that transformed into a deity. And so was Oya. These are all deities who are full of good works and impact on humanity, deserving of worship. They are intermediaries between men and God. That is Isese.”
Africhroyale toured a few temporal lords’ domains in Lagos to have a feel of the day among which were; the Baale of Surulere, Kareem Awoyemi, the Onisabe Gbobi Sabe, HRH Oba Owolabi Adeniyi and Oba of Ojora and Iganmu kingdom, Oba Fatai Aromire Ojora.
Prayers were offered for the continuous growth of the state and the country, respects to whom due was accorded, while different groups of traditional worshippers could be seen adorned in colourful displays of traditional costumes and attires, dancing away to the electric rendition of traditional music.
HRH Oba Tajudeen Bakare used the occasion to send a three-pronged message of encouragement to the Nigerian Government, Isese leaders as well as the generality of Nigerians.
He said:
“My message to the people on Isese day is first of all to the government, then the leaders of Isese and lastly to Nigerians generally. Isese is something we met which has been impacting humanity positively. The government is seeing the great strides in the world of science and technology; made possible by Isese. In the US they have Halloween, which is Isese and not religion. Our country would make great technological advancements if our government would encourage people who are learned in our traditions to chart this course. We are blessed with so many things that are taken away from us, improved upon and brought back to us to patronize.”
“To the leaders of Isese, it was time to stop deceiving the people. People have negative impressions about Isese partly because the leaders have to a large extent been less than honest and have given it a dreaded impression. Isese is not concerned with works of darkness but that of light. Even our attire as you can see is white and not black and white signifies good and not evil. So I advise our leaders to emulate the strides of our great forefathers and their achievements. We must eschew acts of deceit and corruption because of selfish interests.”
“For Nigerians generally, we should pursue the paths of peace, unity and patriotism. Those aspiring to become leaders should make integrity their hallmark. Elected or appointed public officers usually swear an oath (with either the Bible or Koran) to uphold best practices before assumption of work. But yet, you find the EFCC on their tails when their tenures are over. Why can’t we try Ogun, Sango or Osun and see if anybody will steal again? Because they know Isese is a reality, that is why they say NO to it. So you see public servants having a field day looting the commonwealth. It is the height of irresponsibility and wickedness. So many graduates are unemployed or underemployed as a result of years of plundering the nation’s wealth. So Isese would allow for deep and positive thinking, sort of like “do unto others what you’d wish done to you.”

According to Oba Bakare, the occasion is unifying in many ways and believes its import and significance will only be more understood with each passing year, promising an even more exciting version next year.