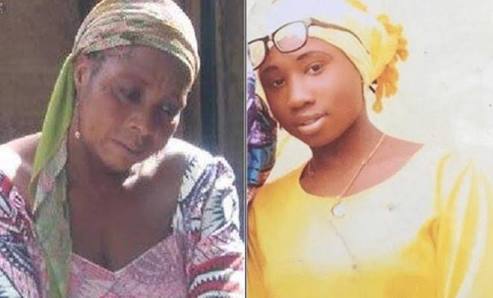 Rebecca Sharibu, mother of Leah Sharibu, one of the abducted 110 Dapchi schoolgirls by Boko Haram in Yobe State, who is yet to be released has filed a

Rebecca Sharibu, mother of Leah Sharibu, one of the abducted 110 Dapchi schoolgirls by Boko Haram in Yobe State, who is yet to be released has filed a suit of N500 million against the Nigerian government.
Also joined in the suit as plaintiffs against the Inspector General of Police and the Attorney General of the Federation over their failure to ensure the release of her daughter and for failure in their statutory duties, were Mr. Daniel David Kadzai and Lift-Up-Now Incorporation, a Non Governmental Organization in the United States of America.
The suit, dated September 19, 2018 with reference no FCH/L/cs/1528/18 was filed at the Federal High Court of Nigeria Lagos and a copy was made available to journalists on Tuesday in Jos, the Plateau State capital.
The plaintiffs are demanding for N500 million as a compensation for the indignities and human deprivations suffered by Leah since her abduction in February 2018.
Part of the prayers sought by the plaintiffs in the suit was an order of the Honourable court to direct and mandate the defendants to secure the immediate and unconditional release of Leah from the custody of her captors, as well as an order compelling the defendants to employ every means in securing her release.
The Plaintiffs also sought: “An order compelling the defendants to pay the plaintiff the sum of N500 million being compensation for the indignities and human deprivations suffered by the plaintiff as a result of the defendants’ dereliction of statutory duties in securing her release from her captors since the month of February, 2018 till date of this action.”
Meanwhile, in an affidavit supporting the application, the 3rd Plaintiff and Executive Director of the Lift-Up-Now Incorporation, Dr Adeniyi Ojutiku, solemnly swears that he has been informed by their lead counsel, Tayo Doughlas Esq, that it is necessary in the circumstance to seek and obtain leave of the Honourable court to issue the originating summons on the defendants.
“I, Dr. Adeniyi Ojutiku, a Nigerian citizen of No. 1316 Shining Water Lane Raleigh, NC 27614, United States of America, do hearby solemnly swear and make oath as follows: That I am an executive Director of the Lift-Up-Now Incorporation, herein plaintiff’s 3rd next friend and I am by virtue of this position conversant with the facts herein deposed.
“That I have the full authority of the 1st, 2nd and 3rd plaintiff’s next friends to make this deposition, and the plaintiff’s claim against the defendants is clearly stated in the originating summons filled herein,” the affidavit partly read.