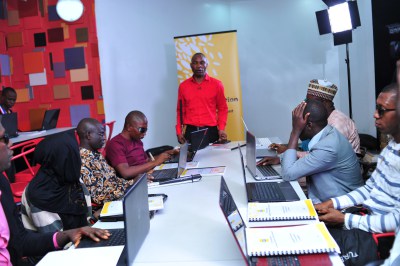 “Even without sight there is still vision” goes a famous saying. Losing one’s pair of eyes is a difficult cross to bear but it does not mean that visu

“Even without sight there is still vision” goes a famous saying. Losing one’s pair of eyes is a difficult cross to bear but it does not mean that visually impaired individuals leave an unhappy and unfulfilled life. In fact they seem to be one of the happiest people in the world judging by how they go about life full of joy and vigor.
“There is ability in disability” is another saying that we have been used to hearing in the past couple of years but maybe the society has not done enough to assist those that have one disability or the other. It is as result of the urge to help people with disabilities realise their potential and find their purpose in life that the corporate social responsibility arm of MTN Nigeria, MTN foundation extended a hand of assistance to some visually impaired individuals from different parts of the country as part of its scholarships programme.
Throughout the month of September 2018 , the ICT company hosted the visually impaired students to a day long workshop at the civic innovation lab Abuja, Protea hotel Owerri and Muson Center, Lagos. The workshops focused majorly on how the visually impaired students who are also under the foundation’s annual academic excellence scholarship can make the most of the new and disruptive technologies that have changed human lives over the last decade. Topics touched upon at the workshop include how the students can land jobs in the competitive Nigerian job market despite their peculiar condition.
Live interview scenarios was organised for the students, where they had to face some of the HR team members of MTN Nigeria and a number of them were very impressive in their response to the questions thrown to them.
After the live interview scenario sessions came the ICT skills training where the students had a masterclass in Computer operations and at the end of the class they were all handed specially designed brailed manuals that they can refer to from time to time.
At the end of the training, the students went home with wealth of knowledge that they all promised to utilise to afford themselves a better life, as well as contribute to society development.
MTN Foundation was launched in 2005 with the sole aim of improving quality of life in communities across the country. For more than a decade, it has helped impact lives positively through several social investment programmes in the areas of education, health and economic