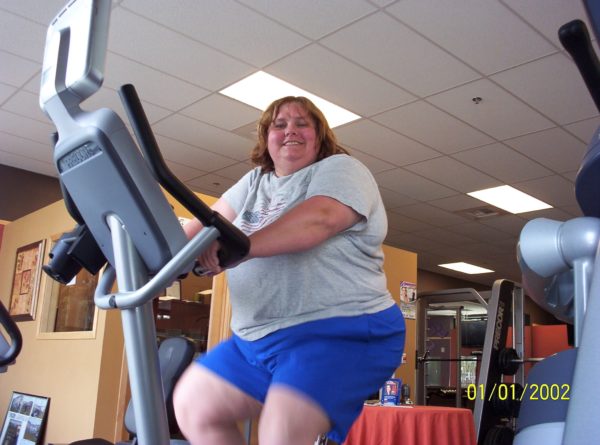 When the lab results confirmed her fear with a dignosis of diabetis, Lori Yates was frequently consumed by suicidal thoughts, the diabetes diagnosis w

When the lab results confirmed her fear with a dignosis of diabetis, Lori Yates was frequently consumed by suicidal thoughts, the diabetes diagnosis was a burden Lori simply could not bear. At 306 pounds she was morbidly obese.
Shortly before she got the call from the doctor’s office, anticipating the diabetes diagnosis, Lori went knocking on the door of small fitness center under construction near her home and asked the owner what she could do to help the club open as soon as possible. Paint? Haul in equipment? Lori told the club owner that she wanted a two-year membership and she wanted to get started now.
Wild mood swings and desperate acts were nothing new to Lori. She says she attempted suicide for the first time at age 6. Many years later, doctors diagnosed her as bipolar.
All of which makes the honor bestowed upon Lori last week even more remarkable.
Anytime Fitness, the largest co-ed fitness club chain in the world, named Lori one of its four “National Member Success Story Winners” for 2010.
“You need to see Lori working out in the gym to believe it,” says Mark Daly, National Media Director for Anytime Fitness. “She is stronger and more determined than almost anyone I’ve ever met.”
In just four months, with the help of a personal trainer (Alex Seal) at the Anytime Fitness club in Lakewood, WA, Lori lost more than 40 pounds. Better still, medical tests confirmed that Lori was no longer diabetic.
Fourteen months after joining the club, Lori had lost an astounding 120 pounds and completely transformed herself.
“It was kind of a shocker to see her when she came back,” says Leslie Becker, M.D., Lori’s doctor. “It was a huge success. I often use [Lori’s story] to provide motivation and inspiration for my other patients.”
The desperation which once consumed Lori’s life, she says, has been replaced by new feelings of hopefulness.
“I never thought, ever thought, there would be a day that I’d love myself, love my body, love where I am at in my life,” says Lori. “I have to tell you, it is incredibly amazing. Something I wouldn’t trade for anything.
This is just one of the many stories of motivation that turns you on and goes on to butress the truth that whatever the mind can conceive, the heart can achieve. from the sordid state Lori was, she was determined to overcome the situation nwhich she did in style, going on to become a National Fitness Champion.