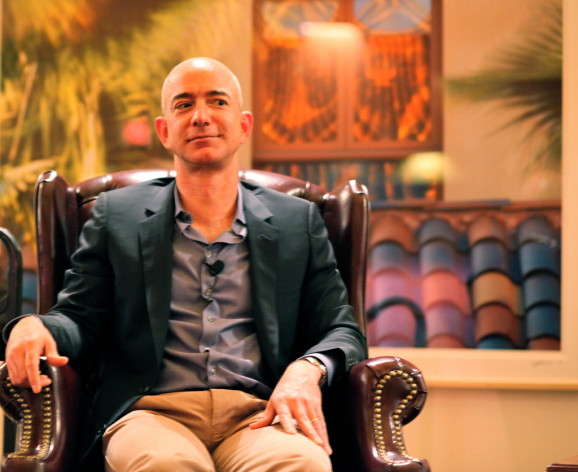 Who is Jeff Bezos? Born on 12th January 1964 in Albuquerque, New Mexico, USA, Amazon founder Jeff Bezos is a man of unlimited ambition who became popu

Who is Jeff Bezos? Born on 12th January 1964 in Albuquerque, New Mexico, USA, Amazon founder Jeff Bezos is a man of unlimited ambition who became popular for his Amazon business. His stepfather is Cuban and little or nothing is known of his biological father.
Amazon CEO Jeff Bezos is a graduate of Electrical Engineering and Computer science from Princeton University in 1986. Shortly after that, he began to fraternize with fat cats on the parquet of Wall Street and later started tracing his own path with a round business in mind: an online bookshop called Cadabra.com.
In 1995 and with about 300 thousand dollars of investment, he began a business that would fragment the market in the future. He had managed to have a vision of what the Internet would become in a few years. He considered that the network would become massive and all business would go online. Truly, this is where we presently are. Jeff is worth $71 billion, a figure that makes him the wealthiest man in the world.

Today the whole world knows the project under the name of Amazon, but by then everything was much simpler. From the garage of his house, like other great entrepreneurs, and with only three processors, cadabra.com began to offer a catalog of online books from different publishers, with the utmost ease for the consumer to search within their stock. He later changed the name, associated to a time in which the listings of the pages were distributed alphabetically. For this reason, Amazon emerged and began to appear in the top of search engines.
The service he offered was so new that the visits grew progressively. In a few months it reached 2,000 daily visitors, a figure that later multiplied by 25 the following year.
In 1997, the success made Amazon become one of the most important companies online.
Bezos had managed to conquer the American dream and was moving forward. He started to expand his business with CD, DVD and other electronic devices and turned a large company into a giant that currently distributes with home delivery service, shoes, clothes, toilet paper, diapers etc thanks to the portals that was acquired for the expansion of the business
These same investments, along with the current and recent purchase of The Washington Post , are what have led him to be known as a high risk entrepreneur, because he usually bet his money on long-haul projects that will need time to mature.
The recent decision to acquire one of the most prestigious newspapers in the United States, adds a bit more eccentricity and eclecticism to its portfolio of companies, among which is a project, with 42 million dollars of investment, which develops a watch that marks millennia instead of hours. A decision that comes to refute his lifestyle: “Work hard, have fun, make history.”