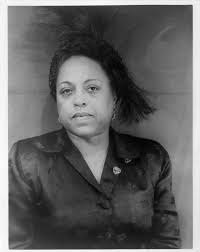 She served in the United Nations until 1953, was on the U.S. Commission for the United Nations Educational, Scientific and Cultural Organization (UNESCO) during President Eisenhower’s Administration, and was the first African American U.S. representative to NATO in 1961.

Sampson’s humble beginnings highlights her significant accomplishments in life.  Edith Spurlock Sampson was born October 13, 1901 in Pittsburgh, Pennsylvania as one of eight children.  Because of the financial needs of the family, Sampson left school at age 14 and worked at a market cleaning fish.  She was able later to continue her education and graduate from high school.

She went on to attend and receive a social work degree from New York School of Social Work which was followed in 1925 by a Bachelor of Law Degree from John Marshall Law School in Chicago.

She became the first woman to receive a Master of Law Degree from Loyola University in 1927.  When her careers with the United Nations and NATO ended, Sampson in 1962 became the first African American elected female judge in Illinois after winning her campaign to be an associate judge to the Municipal Court of Chicago.  Judge Sampson died in Chicago, Illinois on October 8, 1979 at age 77.